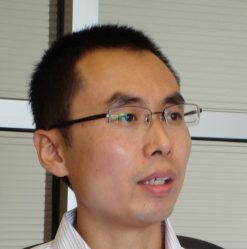 Chen Dong is a project officer with the Canadian Bar Association, where he works on the Legal Aid for Marginalized Groups in China project. Prior to this, he was the training coordinator for International Bridges to Justice in Beijing. Before relocating to Beijing, Mr. Chen worked for most of his career in the city of Urumqi in northwestern China, first as a public servant in the Urumqi Department of Justice and then as the director of the Urumqi Legal Aid Center. Chen was directly involved in enhancing the city’s legal aid system. Chen has also spent significant time volunteering in several legal and social services organizations, including as a council member of the All China Lawyers’ Association, the standing director of the Urumqi Lawyers’ Association, the commissioner of the Urumqi Youth Committee, and a counselor for the Urumqi Consumer Protection Council. He is a graduate of the Northwest University of Politics and Law in Xi’an and the Capital University of Economics and Trade in Beijing. As a PILnet International Fellow, Chen worked on a project related to strengthening the legal aid system in China.