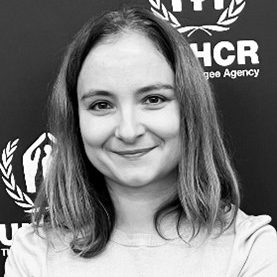 Olga Vorontsova-Mykhailova is an international refugee law professional currently working as a Protection Officer for the UNHCR’s Regional Bureau for Europe. Before joining the Regional Bureau for Europe, she was working as a Refugee Status Determination Adviser (Legal) for UNHCR’s Division of International Protection in Geneva, Switzerland since 2015, where she closely engaged with the work on the GRF Legal Community Pledge. Her experience with UNHCR dates back to 2001, when she joined the UNHCR Regional Office for Ukraine, Belarus and Moldova working with the national governments in strengthening their asylum systems. Between 2008 and 2012, she was deployed to Ethiopia and Uganda in the East and Horn of Africa, heading protection/legal teams in the field offices managing the large refugee camps and settlements, both in the context of refugee reception and voluntary return. Prior to her current assignment, she has spent three years working for UNHCR’s operation in New Delhi, India between 2012 and 2015, where she headed a team managing refugee status determination under UNHCR’s mandate, as well as reception and registration of refugees. In addition to her experience with UNHCR, she held a number of voluntary positions with NGOs and the Kyiv National University legal clinic on the pro bono basis providing legal assistance to refugees, as well as spent several months working for the Council of Europe’s Directorate General for Human Rights and Rule of Law back in 2003. Ms. Vorontsova-Mykhailova comes from Ukraine and has an academic background in international law, with a focus on international human rights and refugee law.