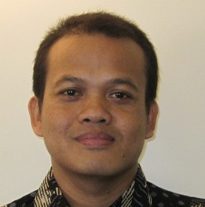 Pultoni is Program Manager for the Indonesian Legal Resource Center (ILRC) and a lecturer of citizenship and constitutional law at Attahiriyah Islamic University in Jakarta. With ILRC, Pultoni has helped promote human rights and social justice in Indonesia's legal education system. Pultoni started his career as a legal aid lawyer at Jakarta Legal Aid Foundation (LBH Jakarta), where he provided legal aid to the urban poor, protecting their rights against housing evictions, unlawful arrests, and domestic violence. He also has worked at the National Consortium for Legal Reform (KRHN) where he established a constitutional court by drafting legislation and creating a selection process for justices. With an Islamic education background in pesantren (Islamic boarding schools), Pultoni also advocates and promotes religious freedom and judicial review of blasphemy law. He received his bachelor’s in law from Attahiriyah Islamic University, Jakarta, and is currently working on a master’s degree at Jayabaya University Jakarta. As a PILnet International Fellow, Pultoni developed a project on how to establish clinical legal education programs in law schools to further legal education reform and the growth of legal aid for marginalized people in Indonesia.