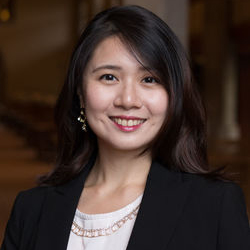 Ray-Yun Hong is a recent graduate of the LL.M. program in international human rights law at the University of Notre Dame (magna cum laude). At Notre Dame, she was particularly interested in gender studies and East Asian affairs. Hong’s research focuses on East Asian gender issues rooted in cultural norms and practice, attempting to indicate the inadequacy of the current international mechanisms as well as the national legal framework in dealing with these issues. Hong earned her LL.B. and LL.M in legal history from the National Taiwan University in 2012 and 2018. In Taiwan, her academic profession focused on the legal history of East-Asian countries, especially Taiwan’s democratic development. With her passions towards feminism, she also participated in the exchange project with Hokkaido University to conduct research on gender issues in Japan. After the 2014 Sunflower Movement in Taiwan, she participated in the NGO, Civil Movement for Constitutional Reform, and assisted with a series of public forums, including managing grassroots forums for civilians and serving as grassroots-leader speaker in the national constitutional promotions’ forum.