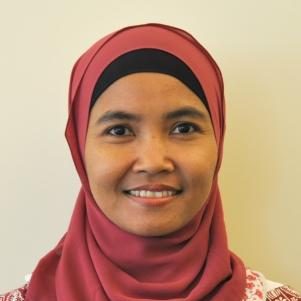 Siti Aminah is a program officer at the Indonesian Legal Resource Center (ILRC), where she implements a program aimed at legal aid reform, social justice, and human rights awareness in Indonesia. In this role, she supports legal clinics at law faculties across Indonesia in order to increase access to justice for marginalized groups. Siti has worked extensively with minority religious groups that have fallen foul of Indonesia’s religious blasphemy law, in particular the Ahmadiyya community, which has faced protests and violence from Islamic fundamentalists. To this end, she has represented victims, witnesses, and suspects from religious minority groups within the criminal justice system, and has called for judicial review of the country’s controversial blasphemy law in the Constitutional Court. She has also advocated in front of Indonesia’s Supreme Court for judicial review of policies that seek to ban the Ahmadiyya. Siti received her bachelor’s degree in law from Diponegoro University, Central Java, Indonesia. As a PILnet International Fellow, she is working to promote access to justice for minorities in Indonesia by developing a workshop and guidebook to improve awareness of the issues facing religious groups. She will also develop a clinic to support religious minorities and their legal advocates.