The Future of Pro Bono

PILnet’s 2019 Global Forum was held on 11-13 November in Singapore. The Forum hosted a variety of speaker and panel events on pressing issues facing the world of public interest law. While the Forum is an opportunity to take stock of the progress that has been made in the year on important public interest matters, it is also a valuable chance for pro bono professionals, whether from law firms, corporations, NGOs or civil society, to come together and learn from each other.

The How Law Works blog team is pleased to share a series of dispatches from the Forum, reflecting on and analysing the many fruitful discussions that took place in Singapore.

This piece, the first in a series of posts from the 2019 Global Forum, touches on topics that arose in the PILnet Global Forum session entitled A Conversation about the Future of Pro Bono, featuring PILnet’s Executive Director Garth Meintjes and Nicolas Patrick Head of Responsible Business at DLA Piper International. PILnet’s Leontine Chuang moderated the conversation. 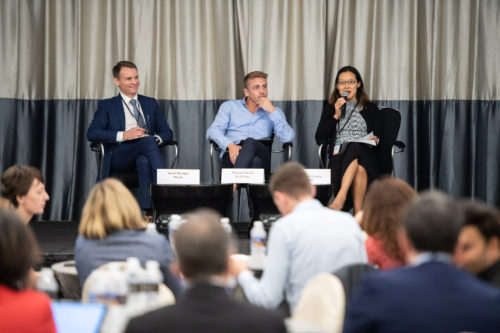 Garth Meintjes, Nicolas Patrick and Leontine Chuang in conversation at the 2019 Global Forum.

The beginning of a new decade has traditionally been a moment to take stock of the developments of the last decade, and to think about how the world will change in the next. At this critical juncture in which the world faces global challenges such as climate change, rising inequality, and mass migration, PILnet hosted a discussion to think through how the pro bono landscape will change in the years to come. The discussion that resulted sparked ideas about how to face the challenges of the future as effectively as possible given changing roles and the tools we have as civil society members.

There is still much to be done to ensure that civil society become better clients of the private sector so as to harness these resources for the public interest.

The Changing Nature of Pro Bono

The question of the future of pro bono is bound up in the changes we foresee to the nature, structure, and function of legal practice in the future. The future of pro bono depends on what the law firm of the future will look like. Traditionally, large corporate law firms have figured prominently in the pro bono landscape because their size and the paying work they take affords them the capacity to engage in pro bono projects. Yet firms — and even the capable and experienced pro bono counsel or coordinators employed by them — cannot be experts in the many public interest concerns and charitable causes brought by pro bono clients. This gap has typically been filled by clearinghouses operating within the civil society space, such as those run by PILnet. This results in a role division between law firms and civil society, where civil society determines the need, decides the priorities, and initiates projects, while law firms implement the agenda that the “client,” civil society, has set.

However in recent years, with the expansion of pro bono and corporate social responsibility efforts in law firms and corporations, private sector actors have begun to play a greater role in the agenda-setting function that was formerly largely the domain of civil society. Well-resourced law firms and corporations are no longer only deciding which kinds of matters to undertake on a case-by-case basis but also are setting firm-wide program areas and priorities for their pro bono and CSR efforts. Even in their paying work, the private sector is increasingly concerned with human rights and social justice issues, aware as they are that respecting human rights makes good business sense. The widespread adoption of international standards for protecting human rights in the course of business, like the Equator Principles, is one piece of evidence of that practice.

The expansion of law firms in pro bono and other ways to have social impact is echoed by another change: a recent trend in large corporate law firms to expand their business practice beyond the legal realm. There is increasing awareness among firms that it makes good business sense to offer a one-stop shop for clients, rather than only a narrow, siloed legal service. General risk mitigation and other business advice sometimes also includes advice on human rights and equality obligations required by law or demanded by engaged consumers and the general public. Some have argued that in this way large international law firms have the potential to serve the public interest efficiently, and at scale.

Given these changes, a “free market” model for pro bono, where law firms take on pro bono projects on a relatively ad hoc basis from the supply that civil society presents them with, could become outdated. As law firms are expanding their role beyond mainly being recipients of pro bono projects, to strategic public interest players, they are determining the nature and course of their pro bono impacts. When led by civil society, decision-making about focus areas and approach are necessarily grounded in the needs of the communities served. But if law firms conducting pro bono assume that responsibility, then the onus will fall on them to commit to acting as responsible players in the public interest field, consulting with and taking into account the voices and perspectives of the organizations and communities they seek to help. Yet even when they are acting with the best of intentions, law firms, driven by a profit motive, cannot be expected to serve communities as well as, or with the well-deserved trust earned by, mission-driven civil society organizations devoted to the cause of bettering the lives of people and communities.

Civil Society and the Future of Pro Bono

While law firms are changing rapidly, what will civil society look like in the future? One possibility is that the traditional role of civil society in shepherding and brokering pro bono work will be supplanted by in-house pro bono and CSR professionals in law firms. The time, effort, and investment of firms in making that outcome successful would have to be significant, and for that reason alone, it would be laudable. Indeed, law firms with large pro bono practices are already making positive moves in this direction, hiring public interest lawyers and nonprofit workers who have cut their teeth in civil society to lead their corporate pro bono and CSR practices. These civil society transplants can assist and empower corporate lawyers also committed to serving the public interest.

There is undoubtedly increasing osmosis between the private and public interest sectors, not just in terms of personnel, but also in terms of the considerations each side takes into account in the course of their work, as evidenced by the Equator Principles. While the increasing awareness of the importance of protecting human rights in the course of business is a welcome development, there may also be a reason to be wary; civil society already experiences a shrinking space in the face of government restrictions. Could the private sector also present a kind of shrinking space problem for civil society?

Many approaches of the private sector can serve the public interest well, for example with regard to efficiency, technology, and data. Fast-developing technology presents new opportunities and challenges to both law firms and civil society. In a world of increasing automation and artificial intelligence, the future of pro bono must reckon with the possibility of a radically different legal and civil society landscape.

The practice of pro bono as we know it is likely to become more effective by more sophisticated usage of data in placing civil society requests for pro bono legal assistance. The clearinghouse of the future will rely on algorithms to both locate legal assistance for civil society members and to determine patterns, areas for focused need, and even to anticipate problems needing legal interventions. Legal tech ventures providing individuals with legal self-help so that they never have to step foot in a lawyer’s office could provide mass access to justice in a way never seen before.

Where more routine legal services may be assumed by technology and even machine learning, it will be the responsibility of civil society members to further strengthen their agenda-setting role, focusing more on identifying the problems to be solved and approaches to be employed in solving them, rather than only doing the work of solving them, which could become increasingly automated. Private sector partners can support civil society in adapting to a new data-driven future, as the private sector itself has done. The possibility of greater efficiency delivered via technology can be harnessed for the public interest. By making use of the available tools, civil society will be better placed to face immense challenges such as climate change. The reality is that much business is not conducted in ethical ways — despite some attempts to involve human rights considerations in the conducting of business. Thus civil society is in a uniquely advantageous position to be able to identify public interest concerns in the private sector that sometimes go overlooked. While public interest–minded private sector actors play an important role in the creation and implementation of such solutions, the impetus still largely comes from civil society, whose responsibilities are first and foremost to the public interest. Civil society organisations like PILnet must lead the way in developing a new way to talk about the public interest, and not only in vitally important but abstract concepts like access to justice and equality, but also in terms of numbers and data. Civil society must be clear about the real impacts of pro bono work, and the ‘returns’ on the investments of law firms and the private sector more generally. Public interest law and pro bono must be seen as tools to be used towards the public interest — an end that is determined by civil society.